What you learn about their deaths could change your life!

About the Author:
Lynn Lusby Pratt has worked with teenagers for the past 15 years. A former missionary to Japan, Lynn has written for numerous publications and age levels and is the author of Debt Free College-We Did It! She is the mother of three grown children.

spiritual warfare vs. the occult. Will they learn enough about God’s words to defend themselves and others or will evil overcome them?

Gatehaven is the 2013 Creation House Fiction Writing Contest Winner.  Click the book image to read reviews and about the author.

Jeff Harshbarger is the founding president of Refuge Ministries, an outreach he began upon leaving Satanism to provide assistance to people escaping the occult.

An ordained minister, he has master’s degrees in youth ministry and Christian counseling and is the author of From Darkness to Light.

As the editor-in-chief of his college newspaper, David Dellman received the Associated Press Award for Excellence in Scholastic Journalism. He was also awarded the Daughters of the American Revolution Award for Excellence in Historical Writing. David is a seminary graduate, and he is the web master of www.GothicChristianity.com, a web site designed to “promote, encourage, and preserve Gothic Christian culture in all its varied forms.”

order through  Barnes and Nobles    OR   Amazon.com

Greyson is your typical teen who is faced with caring for a mentally ill mother who believes demons are after Greyson. When Jessica, Greyson’s mother becomes too much to handle; Greyson’...s life begins to turn upside down. Greyson’s not so typical teenage years begin to change when he moves in with his rich Uncles. It is a story of trying to deal with the loss of a loved one; all the while trying to cope with the world around you. Things really start to change when Greyson learns of his families Angelic linage. This is a spiritual coming of age story; it’s a love story, a classic good vs. evil story that will have you feeling the emotions of the characters involved. Greyson Vagner ‘The Hunted’ has you pulled into the story with it’s opening line, and doesn’t let you off the spiritual roller coaster till the last period.

If you want to read about Greyson visit amazon.com and search greyson vagner 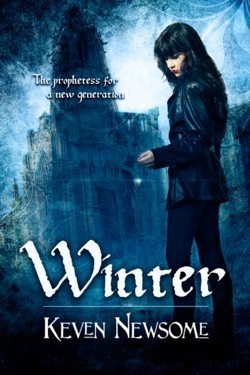 Winter Maessen didn't ask for the gift of prophecy. She's happy being a freak - but now everyone thinks she's crazy. Or evil. Goths aren't all the same, you know. Some are Christians. ...Christians to whom God sends visions. Students at her university are being attacked, and Winter knows there's more than flesh and blood at work. Her gift means she's the only one who can stop it - but at what price?

Keven Newsome is a graduate student at the New Orleans Baptist Theological Seminary, where he is pursuing a Master of Arts in Theology specializing in Supernatural Theology. He writes stories that portray the supernatural and paranormal with a Biblical perspective. Winter is his first book. He currently lives in New Orleans, LA with his wife and their two children.

Keven is also the founder and administrator of The New Authors' Fellowship and produces music and video through Newsome Creative.

Welcome to 1830s Bermondsey, London’s most notorious slum, a land of gang wars, freak shows and boxing matches.  Dr. Grant, a disgraced physician, adopts Wynfield, a ten-year old thief savagely battered by the gang leader for insubordination.  The boy grows up to be a slender, idealistic opium addict who worships Victor Hugo.  By day he steals and resells guns from a weapons factory.  By night he amuses filthy crowds with his adolescent girlfriend, a fragile witch with wolfish eyes. Their tragicomic idyll ends when Wynfield falls under the spell of an elusive benefactress and leaves his bohemian, semi-criminal circle to follow her to Westminster.  There, in the company of blue-blooded outcasts, he learns the secret of his origin and the role he is destined to play in the history of England.  Invoking the ghosts of English anarchists, Guy Fawkes and Oliver Cromwell, Wynfield enters the world’s biggest tavern – the Parliament, where he meets the most ruthless boy gang in the world – the British aristocracy.  Using the mixture of chemicals, satire and horror, Wynfield stages an unforgettable performance and subdues the ruling class – if only for one day.

also, by the same author:

Just wanted to share a link to my new e-book "My Salieri Complex" published by Gypsy Shadow.  The handsome boy on the cover is Joseph Saulnier, who played Lord Granard in "Hugo in London" and Private Martin in "Lady with a Lamp".  Please support the new press and share the link with your friends, relatives and lovers of a good psychological sci-fi thriller.

A New Novel: Wacky Mayla Strong has finally given her life to God. But can He really use a purple-haired young woman with a pierced lip?  Virginia Smith is a freelance writer, a Christian speaker and the contemporary worship leader for Voice of Joy Ministries, based in central Kentucky. Her debut novel, "Just As I Am", was released from Kregel Publications in February 2006.

"Sure to be a timeless classic. If you liked The Chronicles of Narnia, you'll love Majesty!"  LeAnn Weiss - Bestselling author of HugsTM series.

When Jack Campbell finds an old silver chest in his closet, it is his first contact with the wizards of the Nohr World and the beginning of a dark deception, as unseen forces seek to ensnare his sister. With a simple traveling spell, Katie Campbell is thrust into the Nohr World, and the child is finally within their grasp—the one who can find the animal of dominion, the horse of power and glory, the white horse of Christ’s return, known as Majesty. But such a handsome prize is not easily gained, and the way to the horse is fraught with peril.

Once the journey begins, the knowledge within Katie grows and becomes clearer, as do the dangers she must face. While the lure of magic draws Jack closer to the wizards, an angel is sent to protect Katie and watch over her. But even with an angel to protect her, and her brother’s life in the balance, can she truly find the white horse, and if so, what is the fate of mankind and the Nohr World?

Back to Main Page of ChristianGoth.com